Early in April 2014 the Carousel launched of a whimsical new attraction known as “Somewhere Else.” 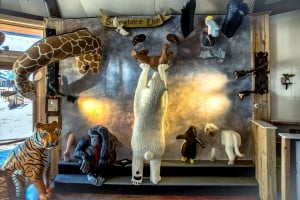 The Carousel of Happiness was created to transport visitors to a time and place of joy. In April carver Scott Harrison has veiled “Somewhere Else,” a wall scene in the carousel building featuring six new animals coming from and going to, well, somewhere else.

“The wall is a kind of portal, we think, maybe to a new dimension.” Harrison said. “Honestly, we haven’t been able to explain it. We’ll leave that up to you. But certainly, magic is afoot.”

The animals, which include a curious giraffe, a thoughtful chimpanzee and an unlikely bear family, pass through a membrane made of lime and crushed marble in the technique used in centuries-old frescoes.

Make a contribution to our year-end fundraising campaign! We are raising $15,000 for maintenance needs in 2023. Give once, or give a small gift monthly ~ a gift of any amount is appreciated!